I met Ather couple days after they arrived from their Wedding in Bahrain. He mentioned he was going to be having a Wedding Reception in Canada and invite all of his family, relatives & friends. This is how the conversation went down... 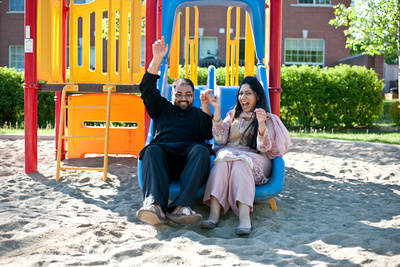 Arif & Rabia Engagement Pictures were actually taken on their anniversary. They have been happily married for two years now and just like the Punjabi's, they like to party. I have known Arif & Rabia since 2009 and we've become such good friends. Arif is a person out of the ordinary, you have not and will never meet someone like him. Rabia loves to dress up and cook (her food is phenomenal!). Happy Anniversary to you two and wishing you lots more anniversaries to come.

Asim & Atika got engaged across the border from Canada. We rented a car and a couple of us went down there to get Asim engaged. We stayed there for about 2 days or so as far as i can remember, and i can tell you this; UFC night after the engagement and Halwa Puri in the morning for breakfast. Totally worth it! I had the opportunity to be a part of their engagement and snap a few shots. They are happily married now and have their 1st Anniversary upcoming very soon. Wishing them great happiness in life and Atika, the brownies you make are out of this WORLD.